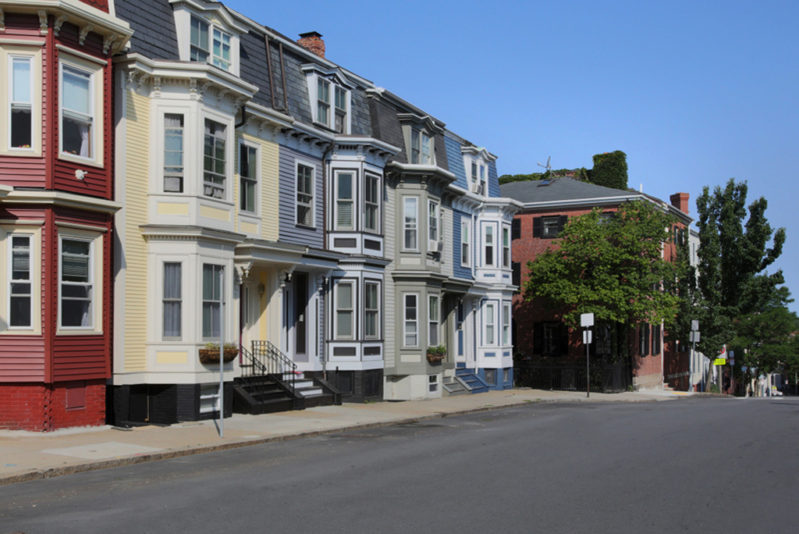 On January 11, 2015 the Charlestown Preservation Society held an Awards Dinner honoring the individuals continuing to preserve the Thompson Square Triangle. The dinner was appropriately held at the Warren Tavern and attended by most members of the current Board, as well as former Board members dating back to the early 1970s.  Three homes were recognized including the Benjamin Thompson House at 119 Main Street, the Timothy Thompson House at 9 Thompson Street, and the 6 Pleasant Street house.  The Warren Tavern was recognized as the foundation restoration of the Thompson Triangle.  The restoration of the Tavern and these houses was part of developer Jim Adam’s broad vision for Thompson Triangle.  In addition, the Charlestown Preservation Society recognized William Lamb, currently leading the Design Review Committee of the CPS for his long term contribution to the community. 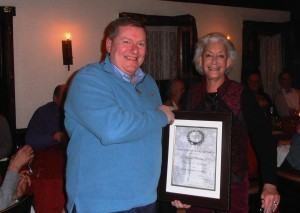 If you live in Charlestown for any period of time you end up eating at the Warren Tavern.  At first you just think it’s one of those charming Boston Taverns. It isn’t until you’ve been around for awhile or at least taken the time to read the menu that you realize that the Warren Tavern is part of Charlestown’s history and well as its renaissance in the late 1960s.

As we know the Warren Tavern was one of the first buildings completed by Eliaphet Newell after the town was burnt during the Battle of Bunker Hill.  Named after the fallen hero General Joseph Warren, the Tavern became a meeting place for all of Charlestown’s residents as well as Warren’s good friend Paul Revere.  It remained open until Newell’s death in 1813.  Over the years the Tavern met an unfortunate fall from grace.  By the time Jim Adams and the newly formed Charlestown Preservation Society arrived in the late 1960s it was fighting for survival from the wrecker’s ball.  Saved from destruction by the efforts of Dick and Ginny Creaser and many others it has been restored to its former glory and the Tavern has once again has become the center of town life.  Where did Dan Ryan go the night he was the election, he came to the Tavern.

So the first Preservation Award went to Thomas Devlin and Patrick O’Sullivan current owners and maintainers of the tradition of the Warren Tavern.

Timothy Thompson came to Charlestown in 1773.   He was a fifth generation descendent of James Thompson one of the original founding families of Charlestown arriving in 1630.  H James Thompson became a member of the First Church on August 31, 1633 and along with others founded , Charlestown Village in North Woburn in 1642.  He died there at the age of 89.  The first house Timothy Thompson built was a house for Mr. Sweetser (the local aged school master) with whom he had an agreement to rent the house.  He lived there with his new wife Mary Frothingham for several years before the Battle of Bunker Hill in which he fought.  Along with many other residents this home near Harvard Street was burned to the ground.  In 1777 Timothy bought property on the corner of Main and Pleasant Streets where he started to build a small one room house.  It was here that one of the first son’s of Charlestown was born after the Battle of Bunker Hill.  Timothy then bought a larger piece of land that reached down to Back Lane now Warren Street.  The dwelling was moved and completed one room at a time.  It is now known as the Timothy Thompson house and was later occupied by Timothy‘s son-in-law William Sawyer hence the house is often referred to as the Thompson Sawyer House.  Sawyer’s son Timothy T. Sawyer was a famous leader and historian of old Charlestown

The house is a reminder of the historic roots of Charlestown. It was dramatically restored as part of the Jim Adams Thompson Triangle Plan including redoing the entire foundation.

Timothy Thompson House Charlestown Preservation Award goes to Susan Rogers the current owner of the house. Her nephew Jeff Dietrich resides in the house along with several other occupants.

Timothy began building a new house at 119 Main Street.  It is in this house that one of his sons, Benjamin Thompson, was born in 1798 for whom the house is now named.  Timothy died there in 1834.  Timothy and Mary’s daughter, Mary Thompson, married Richard Frothingham in 1808.  Their son Richard Frothingham, born 1812, was distinguished in many ways by becoming the mayor of Charlestown, state legislature representative five times, as well as author of several books including: History of Old Charlestown, 1880, Battle of Lexington, Concord and Bunker Hill, the Account of the Bunker Hill Monument and a biography of Joseph Warren.

It was in this house that as a small boy Timothy T. Sawyer recollected fifty years later watching the foundation stone for the Bunker Monument move past their house along with General Lafayette whom his family had met the prior year in Paris.

Architecturally the Benjamin Thompson House remains a superb example of the late Georgian/Federal wood frame construction with its elegant proportions, center hall plan, simple ornamentation, and arched Palladian window.  The window was rebuilt using a custom design during the restoration. the formal gardens are more recent but represent the kind of garden the wealthy families had as described in Timothy Thompson Sawyers History of Charlestown. A number of families have and are continuing to contribute to the beauty of the garden and the coveted role of the house as one of the oldest homes in Charlestown.

This impressive residence at 6 Pleasant Street constitutes a Charlestown preservation effort that began in the 1970’s, with new construction on the foundations of several Federal period buildings. Recent renovations by owners Ali and Matt McCourt sought the look of an authentic 18th century exterior, the clapboard facade reflects nearby 18th.century Warren Tavern and Benjamin and Timothy Thomson houses. The gracious traditional interior of the home uses materials and textures inspired by Ali’s childhood home in Virginia, including a soapstone kitchen counter. The inspiration for the dining room is also the Federal with authentic period armchairs which are family heirlooms.

The second floor retains 18thcentury chimneys and fireplaces and overlooks a lovely extended garden in front of the house. An office, a master suite, and a child’s bedroom grace this floor, keeping to the intimate proportions of the Federal style, enhanced by furnishings.

On the third floor, prominent Federal chimneys and exposed hand-hewn beams reveal the restoration mindset of the owners.  Bedrooms for a child and a grandmother flank a small bath with polished marble floors. 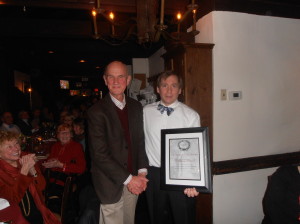 The final award of the night was given to William Lamb, or “Bill” as we all know him.  The award could hardly recognize Bill’s incredible commitment to the community of Charlestown. As one of Charlestown’s most well known architects, Bill has for many years helped restore and sustain Charlestown’s future as a Historic Community.  An architect and resident of Charlestown since 1972, he has witnessed and participated in many changes seen today in Charlestown.  He produced the restoration plans for the Hurd House at 65-71 Main Street and the Old Charlestown Savings Bank at Thompson Square.  Deeply interested in urban design, he has served on several citizen committees which have influenced roadway and park designs in the City of Boston.  He proposed the concept design that was adopted for a tunnel under City Square and lead to the success of the Central Artery North Area Project. Today, Charlestown’s City Square Park graces the land over that tunnel.

More recently, as chair of the Charlestown Preservation Society Design Review Committee, he led the creation of the Charlestown History and Architecture book that features both Charlestown’s fascinating history and its varied architecture.  The Committee reviews local development proposals, makes recommendations to the City, and advocates for a built environment that maintains and enhances the architectural character of Charlestown. Currently, he is focusing on work advocating and protecting a smart growth extension of Charlestown’s residential community into the Sullivan Square area of town.