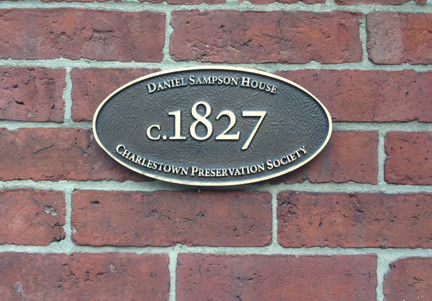 If you were outside yesterday and happened to notice people drilling holes on the sides of buildings, you may have been watching the installation of 17 new historic house markers.   It adds to the over 200 already installed.

The markers are appealing for many reasons.  From one perspective they help remind us of our rich architecture and cultural history.   From another, they help validate the importance of Charlestown as the oldest neighborhood in Boston that needs to be preserved.

In the past most of our applications came from longtime residents.   Now they seem to come from new homeowners who are excited about learning more about the community they live in and its proud history.

This most recent round of applications began last Spring and were reviewed and approved by early December. We took a little extra time finding a new marker supplier, but we believe it is was worth the investment.  We were able to hold costs down and make it easier to have more frequent rounds in the future.

The makers look fabulous.  So, take a few minutes and check out the new marker houses listed below; another three will be installed within the next few weeks.

To be installed in the next few weeks:

Many thanks to Amanda Zettel and Judith McDonough and the Board